Ever since the Covid-19 pandemic started life has been different... for all of us. For many that has involved added struggles to their already daily struggles and to other lucky ones the only differences has been the isolation and sometimes eerie silence of a world in lock down.  So with online everything there has been lots of time to think and so with my class Music that Matters we've been given various ideas and music to be thoughtful about. As our final project we were tasked to come up with an idea that includes sound that will better our neighborhood and bring a positive change. So after much thinking I came up with and idea : Headphones in a box

Headphones in a box is just what it sounds like, headphones in a box but the special thing is that they play songs that are commonly heard throughout the neighborhood of Gage Park. These headphones boxes will include a pair of headphones which people can choose to put on, it will have a basic tablet with the playlist and it will have headphone adapters in case you want to use your own headphones. The plan is to place them on bus stop stations, why bus stop stations you ask? Well after living in Gage park for 7 years and taking the bus home almost every day during the summer, fall and spring you realize how boring it is to wait for the bus. Often I we would stand in the summer heat for an hour doing nothing but waiting for the bus so when I remembered this I knew it would definitely make the wait better for everyone in the neighborhood if we added some form of entertainment to make the waiting a little bit more bearable. So music was a great way to do that, not just any type of music but music commonly heard at neighborhood block parties and restaurants. I was also inspired to specifically play this type of music due to the time we are currently going through. Due to the pandemic our neighborhood has become eerily quite it no longer has it's upbeat feel to it. With many restaurants shut down and many others only doing pick up and delivery the talkative festive neighborhood vibe has disappeared completely. So I decided with these head phones in a box we can also remember what the atmosphere used to be filled with king of nostalgic. And what would this look like you ask? It would look ROUGHLY like this : 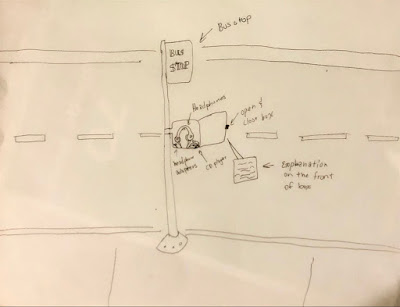 (AAG 2020)
VERY rough sketch , not scaled
Now that I've explained the idea and shown a very rough sketch it's time to show the music which would be played in the headphones. Due to the majority being Mexican in my neighborhood the music that used to be commonly played around the block was regional mexican music, dance music, and even what we call "dinner music". I plan on having a playlist with at least 50 songs but so far I've only collected 10 sample songs here is a link to the play list I've created: Headphone box music . A perfect song that describes the music included in this playlist would be "Nunca es Suficiente" by Los Angeles Azules and Natalia Laufocarde. 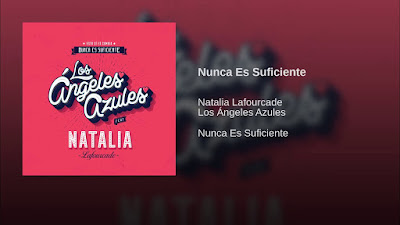 (Source: Google Search Nunca es Suficiente)
link: Nunca Es Suficiente
There is a lot of virtuosity in this song as Natalia's voice is very enchanting in this song which would otherwise be a very saddening song if you look at its lyrics. There is also linking throughout the whole song but the most noticeable part I could notice easily is when she starts singing the chorus and as she starts singing “Y tu te vas” you can hear the drums match perfectly the singing of the lyrics. This song is also based on a memory as we can see the song talks about a failing relationship in which the woman no longer feels the love from the man she is in love with and it talks about the heartbreak that goes with a lost love. There is also an act of authority in this specific performance at minute 3:57 as I believe she goes off script and softly sings in the mic. I believe you could say for me personally this is an example of inventory since I discovered her music with this song and went on to like a lot of her other ones. This type of music was kind of made and built from experiences the artists went through and they just put it all in the lyrics, add some typical mexican instruments and add dramatic singing to it and you’ve got a typical mexican song. Which makes an overall representation of my neighborhood as it is majority mexican/latino.Like most songs similar to this one it was most likely written in a time of heart break. This specific song was written about 5 years ago but its performance as it is with Los Angeles Azules and Natalia Lafourcarde was quite recent dating to two years ago. As relating to it's politics it is not very political and anyone no matter what language you speak or where you come from can listen to this and enjoy the emotions in this song which you don't need to understand the lyrics in order to feel.  Most of the music is fast paced, and seems to be at a 4/4 tempo. Which kind of makes you want to dance. I think this will help get a feel of a neighborhood which often seems like this with all the cars passing by the Friday and Saturday parties, all the restaurants around and businesses. It will also support my goal in the sense that if people are waiting for the bus to arrive it will make them way less bored and make time go a bit faster.I think my idea will help teach others not only about the music common in our neighborhood but help those that already live here feel more connected to their own neighborhood. Those who already live here and use this installation be like oh yeah I've heard that song blasting from so and so’s house or oh yeah that's the song that my neighbors were playing at 3 am last night
Finally with the idea , purpose and type of music already brought up one question remains, which street will this take place in? The answer is right at  California and 55th . Here is a quick video on this area:
Link to video: THE BLOCK 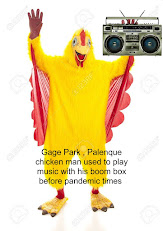 (AG , 2020)
In conclusion I believe incorporating some type of music installation into my neighborhood will not only help people connect more with their neighborhood but also make others outside this neighborhood feel like they know it simply by using songs. It is also great to teach others more about the culture and feel of the neighborhood which I believe will make them feel more in place than out of place. Which is especially helps when you are forced to wait about 30 minutes for the bus to come. It will overall make it a better waiting experience and a learning opportunity for visitors and as for us that live here we can take it as an opportunity to appreciate the music we used to (and going to once again after pandemic) hear late night on Fridays and Saturday. Thank you for reading wish you blessing and the best - Your Friendly neighborhood Abby

Ever since the Covid-19 pandemic started life has been different... for all of us. For many that has involved added struggles to their alre...